Eye care has seen a massive explosion of new diagnostic instruments and treatment procedures in the last number of years. From instruments like the front and back chamber OCTs, Oculus Pentacam and Zeiss GDx to procedures like Intraocular injections to halt the progression of previously untreatable wet macular degeneration, 30 days continues wear silicone soft contact lenses, Orthokeratology and also Corneal Collagen Cross-linking (CxL).

People who have keratoconus are particular excited about the possibility of having Corneal Cross-linking done to their eyes in the hope of improving their sight. It is, however, imperative to stress that CxL is not a cure for keratoconus. The primary function of the procedure is only to halt the progression of the ectasia (bulge or cone on the cornea). A couple of months after the procedure some flattening of the cone can occur, but this is not significant enough for the keratoconus patient to have regular sight without the use of other optical devices like Rigid Gas Permeable contact lenses.

For this reason, it is not a necessity for all keratoconus patients to have the Corneal Collagen Cross-linking procedure. The keratoconus group that will benefit the most from CxL is the ones who develop keratoconus at a young age, usually between the ages of 16 to 28 and show quick thinning and progression of the keratoconus cone.

Corneal Collagen Cross-linking has been available in South Africa for a while but has only recently become available in the United States and Drs James Owen and William Tullo wrote a comprehensive article about CxL for the August edition of the US-based Contact Lens Spectrum titled:

A Closer Look at Corneal Cross-Linking

The first treatment to halt the progression of corneal ectasia may soon be available in the United States. Although corneal collagen cross-linking (CXL) is currently available in most countries around the world, the majority of patients in the United States who have keratoconus must wait to access this technology. This procedure is exciting because it will allow for successful contact lens fitting of patients who might otherwise become contact lens intolerant.

Keratoconus is a progressive, bilateral, asymmetric disease of corneal thinning. The incidence of keratoconus is reported to be one in 100,000 in the general population, with a prevalence of one in 2,000 to one in 435 (Kennedy et al, 1986; Nielson et al, 2007; Georgiou et al, 2004). The condition often begins in adolescence, but can begin at any age. Keratoconus often progresses for 10 to 20 years, but often in unpredictable intervals.

The etiology of keratoconus is unknown. There does appear to be a genetic connection, with a one-in-ten probability that a blood relative of a keratoconus patient will develop keratoconus (Zadnik et al, 1998; Assiri et al, 2005; Lee et al, 1996). Eye rubbing is thought to be a possible stimulus for keratoectatic progression, but it is not known whether this is related to allergic or to atopic-type conditions as well. Oxidative stress is another theory regarding the development of keratoconus. Some studies point to the inability of keratoconus eyes to self-repair, creating an increase in free radicals within the cornea. Without the ability to metabolize—as a result of these free radicals—the collagen of the cornea is damaged and becomes weaker.

The progressive corneal thinning associated with keratoconus often results in irregular astigmatism and corneal scarring, which results in loss of best-corrected vision and reduced visual function. Most patients eventually lose the ability to obtain adequate vision with spectacles and become reliant on GP contact lenses for normal visual function. Ten percent to 22 percent of patients who have keratoconus will eventually need a corneal transplant in one or both eyes (Kennedy et al, 1986; Tuft et al, 1994; Mandell et al, 1997; and others, full list available at http://www.clspectrum.com/references.asp). More than 5,000 corneal transplants are performed annually in the United States due to the progressive nature of keratoconus.

While corneal transplantation continues to improve with advanced techniques including Intralase enabled keratoplasty (IEK) and Descemet’s stripping endothelial keratoplasty (DSEK), rehabilitation from a corneal transplant can still be prolonged (more than 12 months), and most patients continue to need rigid contact lenses to provide satisfactory visual function.

Keratoconus is caused by reduced corneal rigidity associated with an alteration of the normal collagen structure of the cornea. Corneal rigidity is complex and multifactorial. It is determined by the collagen type and distribution and by the fibril and lamellar arrangement within the stroma of the cornea. The collagen composition of a cornea is determined by genetic factors. Keratoconus is less likely to occur with advanced age that diabetes and cigarette smoking can provide protection from keratoconus because of collagen cross-linking via aldehyde glycation and unknown toxic factors.

Some of the more traditional forms of collagen cross-linking including glutaraldehyde cross-linking (prosthetic heart valves) and formaldehyde (pathology specimens) would be toxic to corneal tissue. The use of 0.1% Riboflavin (Vitamin B2) with ultraviolet (UV) light was first reported by Seiler in 1994. The combination of riboflavin with ultraviolet-A (UVA) radiation produces free oxygen radicals. These free radicals cause the induction of cross-linking at three different levels within the cornea. Cross-linking occurs intrahelical within the collagen fibril, interhelical between adjacent collagen fibrils, and inter microfibrillar between adjacent lamellae. More than 100 peer-reviewed articles currently exist detailing the safety and efficacy of CXL in patients who have keratoconus.

The traditional CXL method involves removing the central 6mm to 8mm of corneal epithelium to allow the large riboflavin molecule to penetrate into the corneal stroma (Figure 1). 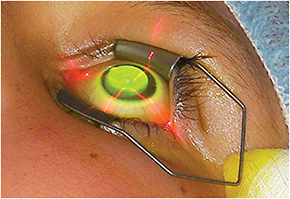 Figure1. Riboflavin within cornea of a patient undergoing CXL

The epithelium can be removed by methods similar to surface ablation including mechanical scrape, alcohol scrape, laser ablation, or Amoil’s brush following a drop of topical anesthetic. A drop of 0.1% riboflavin is instilled into the patient’s eye every two minutes for 30 minutes or until the riboflavin is observed to fluoresce in the anterior chamber, indicating full stromal penetrance. Next, 3.0mW/cm2 of UV light (370nm) is applied for 30 minutes (Figure 2), with additional drops of riboflavin instilled every two minutes.

A bandage contact lens is applied to the eye, and a postoperative regimen similar to that for photorefractive keratectomy (PRK) is initiated, including a fourth-generation fluoroquinolone and a steroid drop. The bandage contact lens is removed once the epithelium is healed, and topical steroids are continued for four to 12 weeks.

What to Expect Postoperatively

Thinning of the cornea initially occurs after CXL, but most corneas return to baseline thickness between three and six months postoperatively (Greenstein et al, 2011). While corneal rigidity increases after CXL, corneal hysteresis (CH) and corneal resistance factor (CRF) demonstrate no significant changes (Vicente and Boxer Wachler, 2010). Therefore, there should not be any need to adjust intraocular pressure (IOP) measurements in these patients. Mild anterior stromal haze is expected during the early postoperative period. This stromal hazing is part of the cross-linking process and resolves within three to six months (Greenstein et al, 2010). Permanent stromal haze is a greater risk in corneas that are thin and in corneas that are steeper than 58D. The stromal haze is because of the cross-linking that occurs in the anterior 250 to 350 microns of corneal stroma. Deeper cross-linking can be damaging to corneal endothelium; therefore, corneas less than 400 microns in thickness should not undergo the procedure. Thickening corneas that are less than 400 microns with hypotonic riboflavin may provide a safe method of cross-linking thinner corneas (Hafezi et al, 2010). Corneas less than 400 microns may be safely cross-linked with the epithelium in place due to reduced cytotoxic effects to 200 microns (Wollensak and Iomdina, 2009).

CXL halts the progression of keratoconus in almost all patients who have the condition (Coskun-seven et al, 2009). Flattening of the steepest simulated keratometry (K-Max) value by 1.45D to 2.46D occurs at 12 months postoperatively, on average (Wittig-Silva et al, 2008). The refractive spherical equivalent is reduced by 1.87D after one year and up to 2.14D after four years. Improvements in uncorrected visual acuity of 2.44 (± 0.88) lines after one year and 2.85 lines of Snellen acuity after 48 months have been reported (Vinciguerra et al, 2009). Corneal topography indices improve after CXL but demonstrate no correlation with increases in visual acuity (Greenstein et al, 2011b).

What Does the Future Hold?

CXL continues to evolve. Multiple clinical studies including United States Food and Drug Administration (FDA) clinical trials are underway to determine whether sufficient riboflavin can be placed into the corneal stroma to obtain significant CXL without removing the corneal epithelium. Insufficient crosslinking may occur with an intact epithelium due to the large size of the riboflavin molecule (Baiocchi et al, 2009). Stromal saturation with riboflavin is more rapid with mechanical removal of the epithelium as compared to excimer laser removal (Bakke et al, 2009).

CXL alone—while halting the progression of the ectasia—does not offer a significant improvement in visual function in most patients. Corneal refractive surgery in patients who have known risk factors for keratoconus may, in fact, increase the progression of the ectasia. Simultaneous topography-guided PRK, combined with CXL, may further increase the visual function of patients who have keratoconus while maintaining a stable cornea (Kymionis et al, 2009; Kanellopoulos and Binder, 2010). Adding CXL to corneal intrastromal segments (Intacs [Addition Technology]) may increase the effect when treating keratoconus (Vicente and Boxer Wachler, 2010).

Additional future applications of CXL include stabilization of RK sutures, enhancement of corneal Intacs, and treatment of both resistant corneal keratitis and chronic bullous keratitis (Sedaghat et al, 2010; Gatzioufas and Seitz, 2010). While many studies have examined the use of CXL with orthokeratology, results have been disappointing possibly due to the lack of stromal remodeling and apparent epithelial remodeling that occurs in orthokeratology.

CXL does appear to have an effect on laser-assisted-in-situ-keratomileusis (LASIK) surgery, resulting in thicker flaps and reduced myopic ablation effect (Kampik et al, 2010). The future use of prophylactic CXL in LASIK and PRK surgery for “at risk” corneas may offer a safer method of providing laser vision correction.

It is likely that future forms of CXL will not require the removal of corneal epithelium (Avila and Navia, 2010). Based on CXL’s ability to stabilize the cornea, it is believed that this procedure will be performed on emerging keratoconus patients, not on advanced keratoconus patients. The clinical criteria for when to treat these patients will be established once the procedure has become FDA-approved and more research is available on how the contact lens treatments of these patients improve.

This site uses Akismet to reduce spam. Learn how your comment data is processed.